It was mid-November and I was heading south to one of my favorite locations… As the last bit of concrete and steel from South Africa’s judicial capital disappeared in my rearview mirror and the horizon lit up with dancing illusions on the salt pans of the Great Karoo my mind drifted back to the places I’ve visited in the last 12 months. I was lucky enough to see some amazing and breathtakingly beautiful places but none quite like the Karoo.

There’s something about this semi-desert region of Southern Africa with its long narrow roads and vast plains of emptiness that I find alluring. It’s difficult to describe, probably because there isn’t much to describe, but the Karoo just feels right to me and every time I go back I get a familiar, coming home, feeling. This time the Karoo was going to be home for at least a week, as we got invited by Chris van der Post and his family to film an episode of the WildFly fishing series at their lodge on the banks of the Orange River. Gkhui Gkhui River Lodge is a brand new fly fishing and hunting lodge that was built early in 2017. The luxury accommodation is situated 20 minutes outside Hopetown, around some of the best Yellowfish waters I have come across. 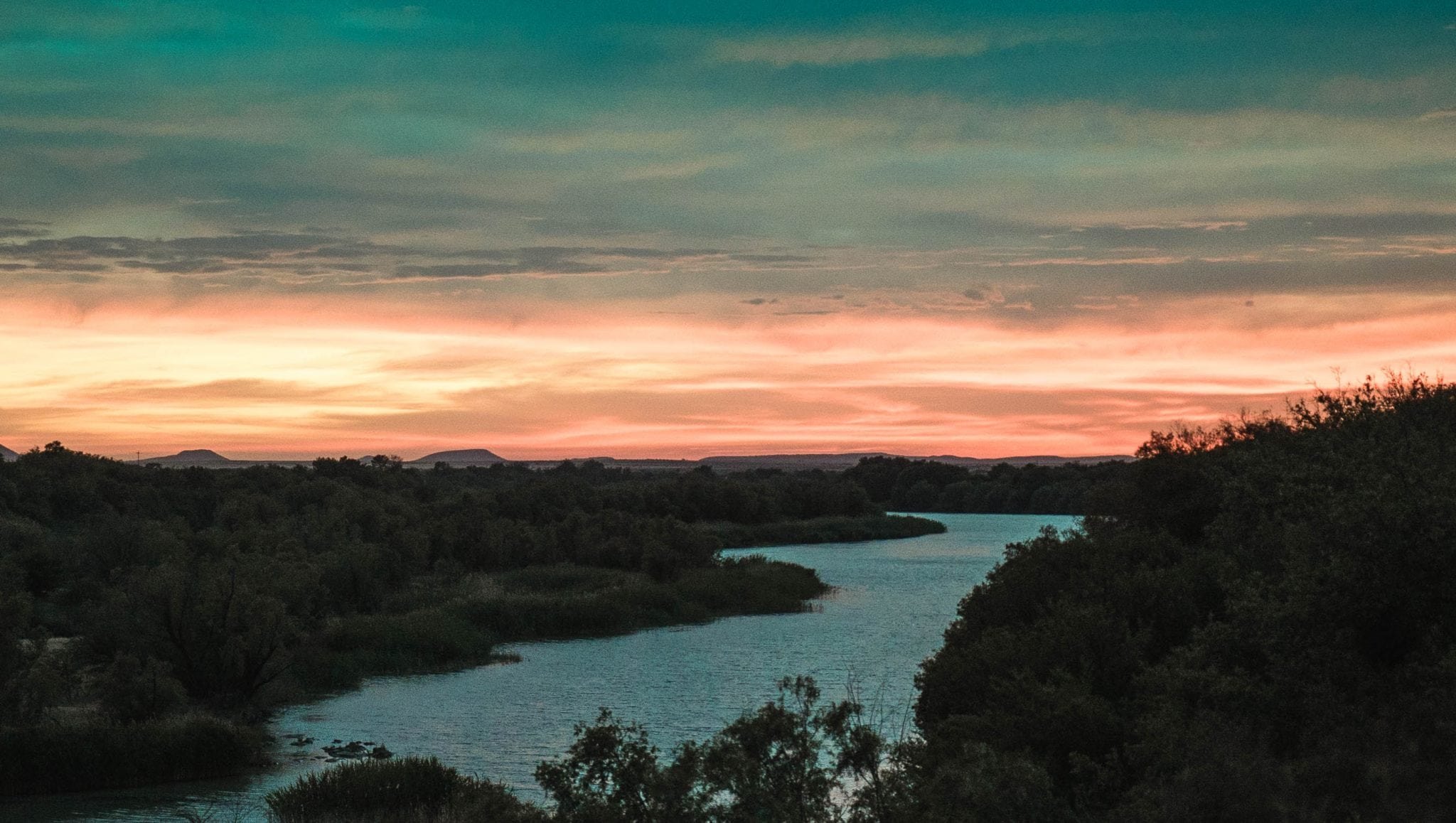 When we first walked down the pathway towards the main entrance of the lodge my expectations were already exceeded and like the first couple bars of a catchy song I could tell the rest was going to be good. We were greeted by Chris and his friendly staff who were waiting to serve us lunch and the start of what was to be an unforgettable dining experience. No kidding, the food was unbelievable as Chris’s wife and sister-in-law cooked up traditional “boerekos” with a modern day twist, think Bobby Flay born on a farm somewhere in the Free State.

With stomachs filled we set out for an afternoon session on the river. As luck would have it we timed it perfectly, timing plays a big role on this particular stretch of the Orange River. With Vanderkloof Dam 45 minutes upstream, the river rises a considerable amount when they let out water at the dam wall for the purpose of generating electricity. Around mid-morning, the water rises and then starts to drop again late afternoon. Chris explained to us how the fishing really comes on when the water levels start to drop. 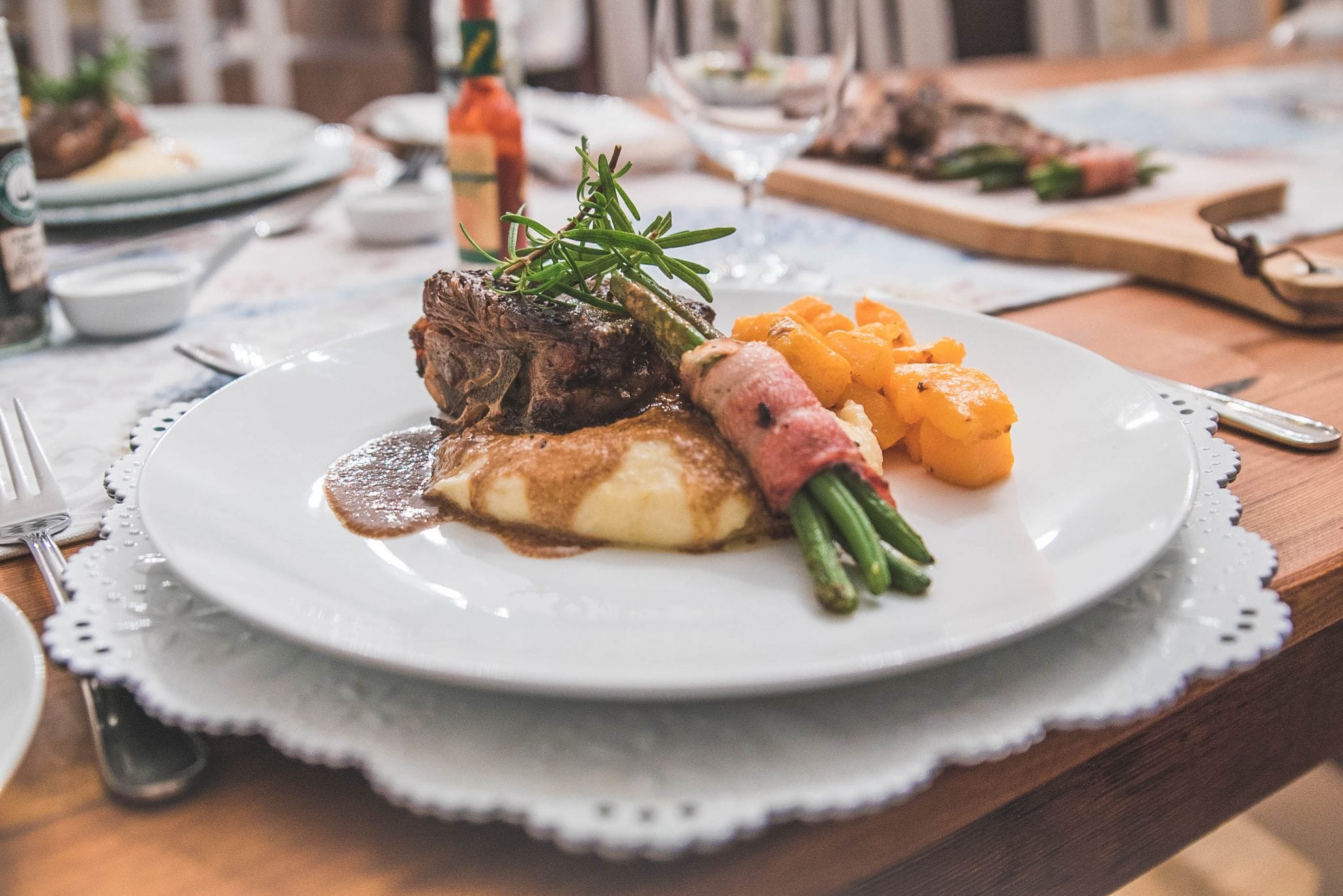 My game plan for this particular trip was to do a lot of sight fishing to Smallmouth and Largemouth Yellows and where possible present big dry flies to see if I could peak the interest of any golden resident. Unfortunately, due to dam upstream being low, coming out of a major drought the water color wasn’t its usual emerald green and slightly murky but clearing as the levels dropped. I stuck to the plan though and rigged up a dry- dropper rig to fish the waters around the lodge and the plan paid off. I even convinced a juvenile largie to eat the dropper nymph in the very first session.

Part of our mission was also to target some Largemouth yellows and the next day we did a few drifts, looking for some big largies. I started off with a solid take on large streamer I was stripping through some flooded weed, the fish didn’t stay on for long however and then it went quiet. Now I’ve done enough largie fishing to know that it’s just par for the course but when the wind picked up later in the afternoon bringing with it some dubious looking clouds we made a collective decision to focus on the smallmouth yellows, targeting them on dries. I would have to go back another time, hopefully with some better conditions to bag the elusive one. 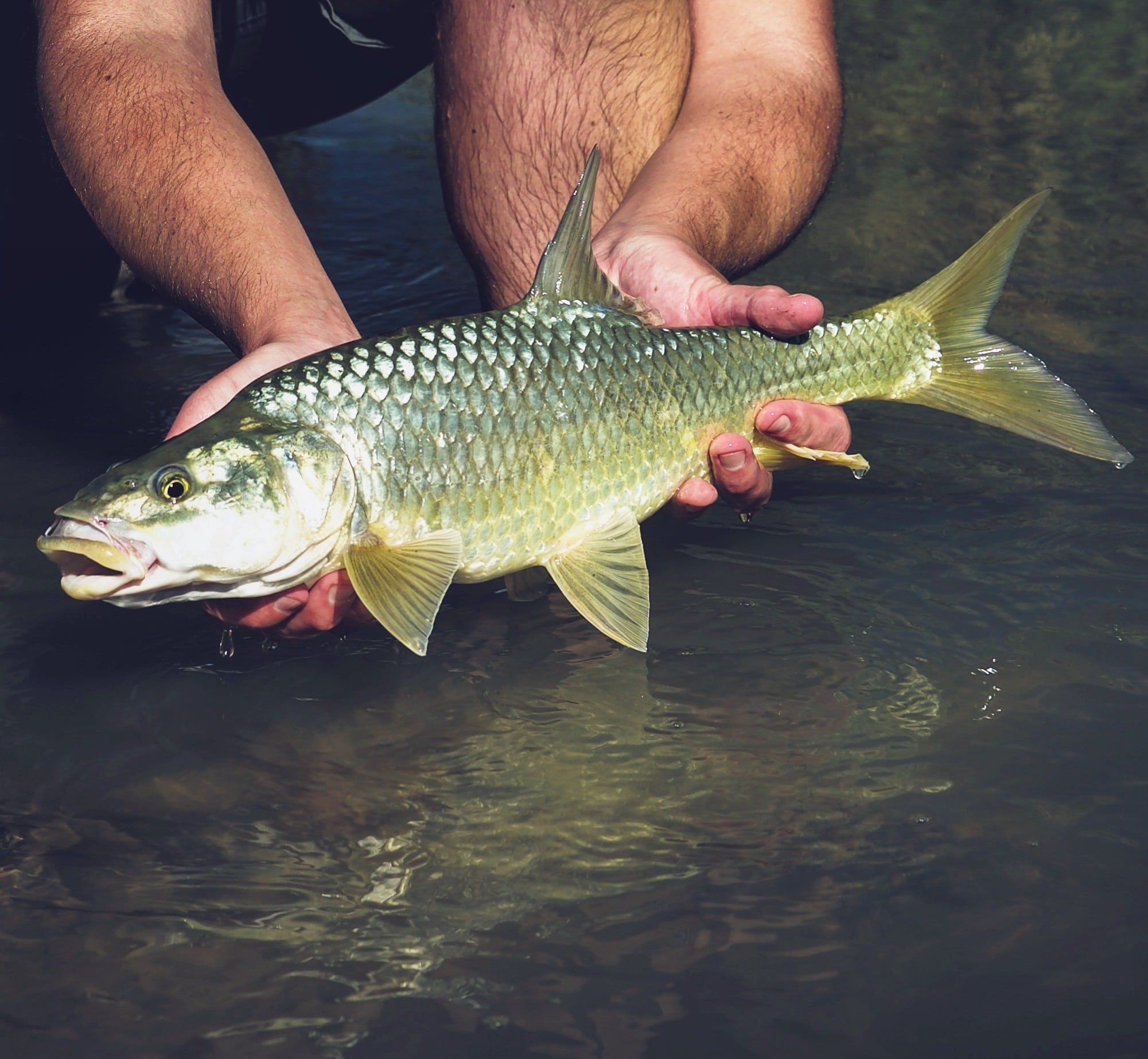 So the next 3 days we spent searching for yellows who would rise to the surface to eat our dry fly presentations. Chris who knows this stretch of the Orange River like the back of his hand would move between upstream and downstream spots to accommodate the high water levels and ensure we fish the most productive waters at the right time. What followed was the best dry fly fishing I have experienced in quite some time. We would walk in pairs and spot fish in pocket water, one angler would line up the cast as the other kept eyes on the fish, a short cast with a slight plop of the fly would do the trick as we stood and watched every fish slowly rise to investigate. We had some refusals, some missed takes and also dropped one or two good fish but we also managed to land some good smallmouth and capture a few of the best dry fly eats I’ve seen on film. 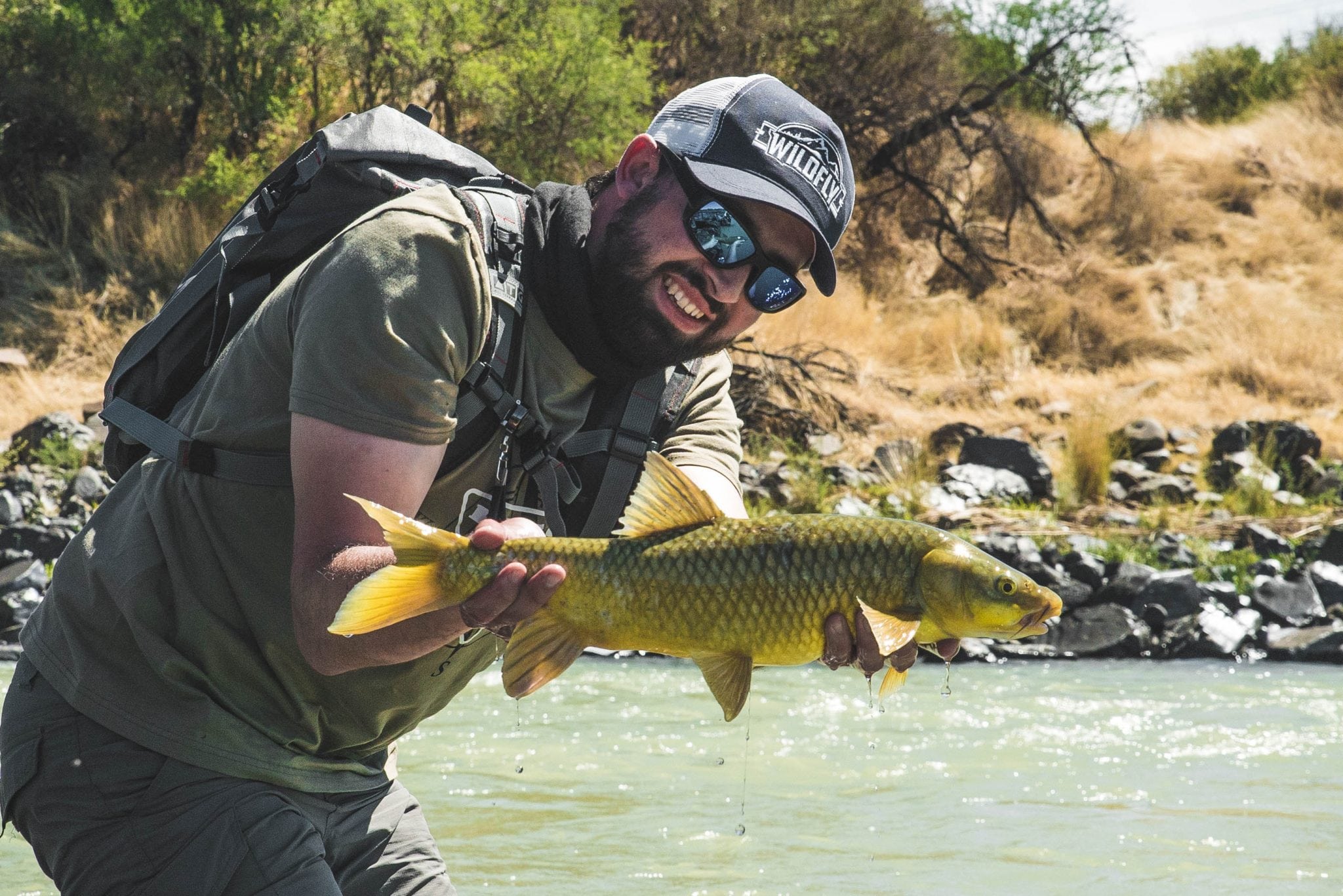 On our final day the foul weather finally set in, we woke up to a miserable drizzle and wind that would later pick up to 20 knots. Now, what’s a fly fishing trip without bad weather…? I wasn’t too bothered though, we had some amazing fishing the day before and finished off the show with some good footage that we can string together for what in my opinion will be a great episode and something completely different. It was decided that we would stick around and fish a small branched off stream in front of the lodge which so happens to be fairly sheltered from windy conditions if they do occur. My good friend Richard put the camera down for a couple of hours and got behind the rod. We noticed some fish rising so I tied on a large beetle. Rich made a cast towards the rising fish making sure to plop the fly at the end of the cast. Sure thing the fish came up to see what the ruckus was and in the same breath sipped down the beetle like it was a dry martini. With high fives and hero shots out of the way I pulled out my little point and shoot camera and we took turns at filming and fishing for these eager yellows and ended the short session with 6 smallies on dry and some crazy takes on camera which I will be editing into a little behind the scenes vlog episode, so stay tuned. 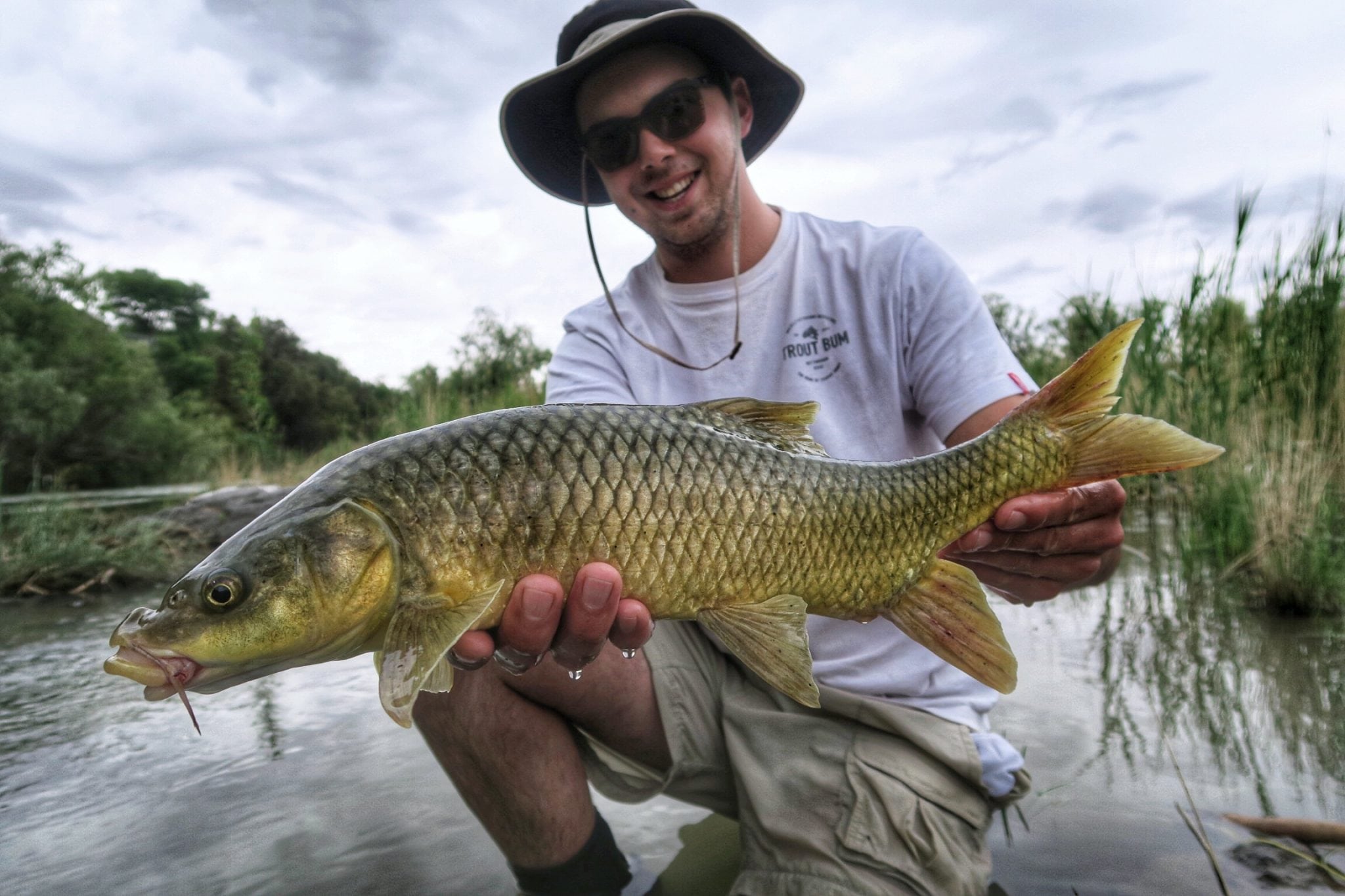 On the whole, it was another adventure for the books and it just reaffirmed my stance that the Orange River is a world-class fly fishing destination, and Gkhui Gkhui lodge is the complete package for anglers looking to experience the best that the Orange River has to offer. With experienced fishing guides, luxury accommodation and excellent catering it’s worth booking your next fishing adventure with Gkhui Ghkui River Lodge. 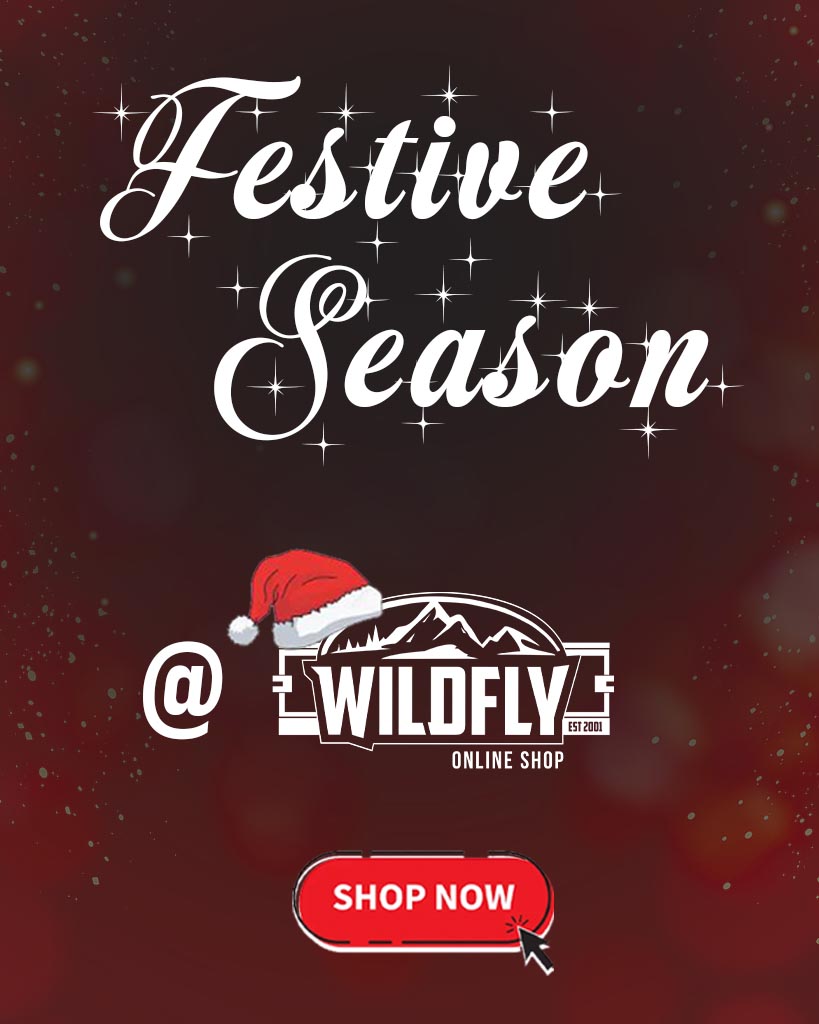