Getting to Mount Kenya by vehicle from Nairobi is interesting to say the least.

It’s 160 km and takes around 5 hours on what are ostensibly tar roads which would have Mr. MacAdam spinning in his grave. The gay abandon with which Kenyans drive is akin to putting a bunch of drunk teenagers into dodgem cars and advising them not to crash into each other.

Road signs and markings, if there are any, are really more for adding a splash of colour to the terrain rather than having any actual bearing on the way the traffic behaves. Overtaking is a bit like playing chicken with a chicken and often leaves passengers clucking accordingly.

The drivers themselves though, seem to consider this mayhem completely normal, hardly batting an eyelid as their unsuspecting passengers hurtle towards the windscreen each time they slam on brakes to avoid a certain head on collision.

One needs to be particularly careful when sucking on a cold bottle of Tusker beer snatched from the cold box in the rare moments when both hands are not required to maintain contact with your seat and you are not squealing like a debutante seeing her first party dress. The neck of the bottle is likely to knock out your front teeth, and possibly much worse, if not in full control when snatching a mouthful between violent overtaking maneuvers.

The first glimpse of the monolith that is Mount Kenya is impressive. Rising 5200 meters into the sky, with smatterings of snow near the summit, it’s difficult to believe you’re virtually on the equator in Africa. 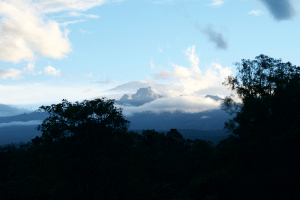 Once off the main road a sense of post adrenaline calm pervades and the Tuskers are far easier to imbibe.

The magnificent lush green Montain forest envelops the surrounds in a kind of fairyland splendor and strange sounds emanate from unseen fauna hiding in the canopies.

Of course Gareth, myself and Jerry were here to fish, whilst also filming a TV show on what Kenya offers sport fishers.

I’ve often wondered at the passion for fly fishing that saw the early colonials going to such unbelievable lengths to introduce Trout into remote and extreme areas like New Zealand, Chile, South Africa and Kenya. I mean didn’t they have anything better to do? There they were, busy taming wilderness areas full of dangerous animals, unfriendly locals and tropical diseases, yet they had time to consider sending tiny eggs on rickety boats from Europe to hatch out and then introduce these temperamental salmanoids into rivers and streams all over the world! You’ve just got to appreciate that if you’re a fisherman.

With its altitude and gin clear water, Mount Kenya has the perfect habitat for Trout to breed and thrive. One strain of Rainbows has proliferated in these cold source waters, in particular the Ragati River. Called the Ragati Red, at first glance it looks like a spawning male in full colour, but in fact even the females carry the telltale red markings year round. I wanted one of those in my net!

We spent our first night in the National Park at the famous Serena Mountain Lodge. Built in the 70’s entirely out of wood with sweeping views of the mountain overlooking a waterhole frequented by Buffalo and Elephant, it’s like stepping back in time. There are no TV’s, but the walls between rooms are flimsy enough to be intimately involved in your neighbor’s proclivities, which can be more interesting anyway and there are no irritating adverts.

At first light we fired up the trusty Land Cruiser and headed into the Ragati Conservancy forest. Stopping only to chop trees that had fallen across the muddy tracks we soon arrived at a charming log cabin tucked away and reached by crossing a small wooden walk bridge over a crystal fast flowing stream that we knew held Trout. This was home for the next few days.

Of course Gareth, as is his wont, rigged his rod with lightning speed and blundered immediately into the nearest water, frightening not only the fish, but the local ghillies as well, who are there to spot for dangerous animals as well as fish.

Allowing Gareth only enough time to snag his fly in the nearest tree, Jerry calmly wandered down to the same pool right in front of the cabin and poached a beautiful Rainbow from right under his nose.

Things were going along as normal

The dense forest and narrow streams mean that fishing here is technical, with short accurate roll casts being used often. Most back casts will result in unpleasant expletives and lost flies. Even walking in the stream itself the overhanging canopy remains a challenge.

But very soon we realized even the thinnest lie or smallest pool could produce plump specimens happy to hold in the frigid water and eager for a meal to arrive.

It’s easy to be mesmerized by the brilliantly coloured Turaco’s and Parrots fluttering around overhead amongst various species of monkey, but the steaming piles of elephant dung on the narrow paths are a reminder to keep your wits about you. There is good reason why its mandatory to have a local guide with you at all times, although to be honest they are armed only with a machete, which I wasn’t certain would suffice in the case of a startled buffalo in tight confines. 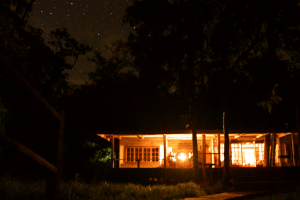 The night sky is breathtaking in its scope and clarity, but the eerie screams of the nocturnal Tree Hyraxes found here are a little unnerving at first.

The beautifully appointed 4-bedroom log cabin with a large open fireplace is available for hire on either a self -catering or fully catered basis. We were spoiled by the owners with fantastic fare and hospitality. I particularly appreciated the fine linen on the massive beds which made it rather more difficult than necessary to consider throwing a line for the early morning rise.

I’m not sure who coined the phrase “size doesn’t count”, but I do know they didn’t fish.

The Ragati River flows into a large dam on the lower slopes with plenty of space for casting, and more importantly, flat areas for positioning the cold box. It was to this area I gravitated while the youngsters explored the many pristine forest streams.

Only steps away from my cooler I was able to put in long raking exquisitely timed casts while simultaneously enjoying the solitude and a cold Tusker. After hours of patient practice, I can even do this sitting down.

It wasn’t long before a large Mrs. Simpson I had judiciously appropriated from Jeremy’s box worked her magic and my line went tight. I knew immediately it was a decent fish, but it was only when I had it a little closer to the bank that I could see the dark red flanks of a magnificent Ragati Red cock fish. Around 5 pounds of pure muscle, this was to be the trophy of our time at Mount Kenya and certainly a fish I shall remember always.

Fortunately, I had a cameraman with me, so had photographic proof to present to my mates around the fire that evening. Not that they wouldn’t have taken my word for it of course.

So if you’re ever at a loose end in Kenya, I strongly recommend you try to get up to the Mountain and the Ragati Conservancy (bookings@ragati.com).

Even if you don’t fish it’s a magical experience.

My only advice would be to hire a helicopter to get there if possible.